Manila. - The number of people displaced by armed conflict in Maguindanao province has reached more than 123,000 as government forces continue their combat operations, records from the Autonomous Region in Muslim Mindanao (ARMM) government showed on Wednesday. According to the Filipino newspaper Inter Aksyon, life hasn’t been the same since Jan. 25, 2015, the day 44 commandos of the Special Action Force of the Philippine National Police, 18 combatants of the Moro Islamic Liberation Front, and five civilians died in the Mamasapano encounter.

"Mamasapano is a place we now know, not for its tourism potentials but for the bloody and deadly operation to eliminate a US-tagged terrorist by the name of Marwan. Nearly two months after the incident, the families of the fallen and the public are still seeking the truth and accountability."

In the article the governments´ "peace approach" is critized for leading to an all-out war. "Evacuation centers, where a scant supply of noodles, rice and sardines replaces the usual diet of root crops and vegetables, symbolize the war’s disastrous impact on innocent lives. Not learning from the Mamasapano incident, the government is now waging a war that sacrifices people, the most affected of whom are the children, the elderly and the women." 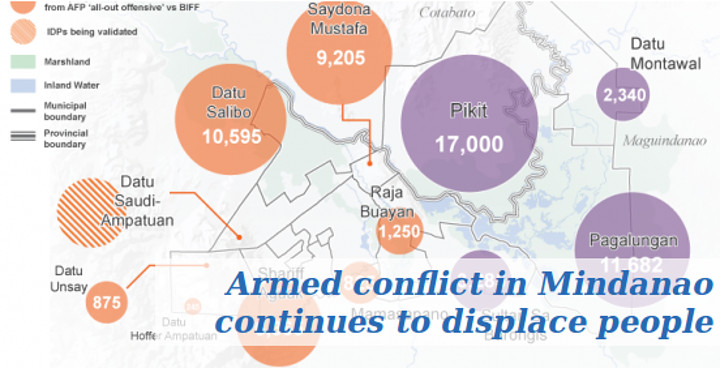 Senator Aquino said in a statement issued on Tuesday in the Inter AksyonInter Aksyon: "The government must work to return to normalcy the lives of those displaced at the soonest possible time."  He also called on the President to ensure that the evacuees’ needs are "immediately addressed, including temporary shelter, food, water, clothing, and alternative livelihood, among other needs," particularly of children who are invariably the most vulnerable and affected by armed conflict. Aside from milk and medicine, the senator said children must also be provided immediate psycho-social intervention. Although the region has enough funds for relief, lawyer Laisa Alamia, ARMM executive secretary and chair of ARMM-HEART, has appealed for non-food items from donors and nongovernmental organizations.

Worried about the resulting humanitarian crisis, nongovernment groups are calling on the military to halt its offensive in Maguindanao to stem the tide of civilian evacuees fleeing the fighting reported the Sunstar on Tuesday. According to the article at least 10 peace networks issued a statement on an "urgent humanitarian appeal for the suspension of military operations" which they said have taken a heavy toll on civilians.

"We express our gravest concern over the glaring civilian protection and safety issues caused by the operation," the peace advocates say. "We are alarmed about the use of artillery shelling and airstrikes with bombs reportedly dropped near civilian homes. We categorically state that a humanitarian crisis is already staring us in the face as an effect of the prolonged military action against lawless elements," the groups added.

In the beginning of March an officer of the Philippine National Police Special Action Force who survived the January 25 Mamasapano clash has created a petition on the advocacy platform Change.org urging the Philippine government to pursue the peace process in Mindanao despite calls for an all-out war against the Moro Islamic Liberation Front. "The true face of war is not that dead soldier or rebel on the battlefield. It is a mother fleeing home with a cartload of offspring, amid sounds of gunfire," he wrote in the petition "Pursue the Peace Process in Mindanao #FightForPeace". He explains his motivation: "In childhood, I watched the flight of thousands of people from nearby towns. Entire families desperately seeking safe haven, war having obliterated their communities."

=> Guide to the Philippines conflict

=> ZFD Publikation: Division Impossible: A Higaonon inspired story of conflict and its transformation